I have a tendency to want to do things myself: partly a desire to understand all parts of the creative process and partly being cheap.  If I can easily draw it, I won’t buy it.

On Flickr, a contact, who is part of a swap we are currently both in, posted pictures of a really cool bordered star.  I asked her where she got the pattern, but she had drafted it herself, based on something similar she had seen and did not have it electronically.  She thought I could probably make one.  Not sure if it was a compliment or a challenge, but I bit.

Another Flickr participant is Bad-Skirt Amy.  From her I had the idea of my last entry regarding drunkard path log cabins.  She has done other stuff and tends to use WORD to create the templates.  While I have and know how to use AutoCad, a computer drafting program, I was intrigued.
WORD includes the ability to draw a variety of shapes, including squares, rectangles, a variety of triangles and lines.  Since much of quilting uses no more than these shapes, you can draw most anything.  Since most patterns are repeats of mirror images, you can then flip and rotate the image.  That ensures that everything matches at the seams.   It is also easy to control size and create templates for several sizes of blocks.  When you are done, you can save it as a PDF, which keeps things from changing.

My first star came out okay, BUT, it wasn’t right.  I thought the inner border too narrow and then I realized that where the star fins met vertically and horizontally the angle was different from the where they met at the diagonal. However, anything symmetrical that is repeated often looks just fine, so if you want this template, it can be found here. 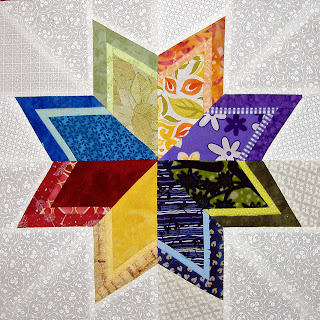 I fixed both problems and made a second block.  Much better.  The inner border wasn’t quite equal both ways, but that was a quick fix.  If you want the pattern, here’s the link.  It will create a 12”block when finished. 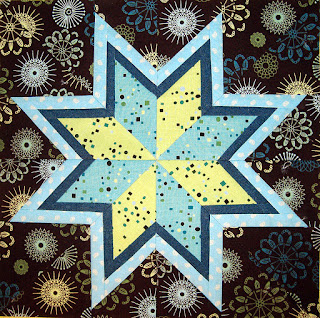 With templates, I always recommend that the outer edges be more than the normal ¼” seam allowance – it gives you something to trim in case something went a bit wonky.  So I have drawn in the extra on this second block. With paper piecing, fabric biases are largely ignored and the likelihood of some things stretching is higher.

Also, refer to my tutorial on printing out PDF files - Adobe Reader usually want to shrink to fit, when scaling is not really wanted.
Email ThisBlogThis!Share to TwitterShare to FacebookShare to Pinterest
Labels: Quilting Projects

Lovely one! I am just a beginner and I love paperpiecing. Thanks for the pattern.
(In Word? really? Hmmm that's something for the bucketlist ;-))

Fantastic! Thanks for doing all the math!

I love your star. In fact I love it so much I just made one. I hope you don't mind that I'm sending my BEE group over to see it and print the template.

Sounds good to me - have fun with it! You should post your bee's results somwhere - would love to see them.

Monica,
Thanks for sharing with us....I am a star lover! Another pattern to add to my ever growing list! How I wish there were more hours in a day!

Moni, I have loved this star since it started appearing in Flickr last summer. I might use it for my starter in the International Bee :)

Love your star. Thank You very much.

Thank you for sharing your beautiful star pattern!! I am just learning PP and love it!!! Now I'm going to give this one a try :)

How does one know the assembly order to a self designed paper pattern? Seems like a mystery to me. Do you just start in one corner and work you way out?

Good question. You have to study the template and find a logical piecing sequence so that no partial seams occur. Joining two oieces creates an edge that is as long as the edge of the next piece that is sewn on. Sometimes you have to redraw a line to make that happen. Usually you will work from the inside out or from one point to the next. Study predone designs and look how they come together. That's how I figured it out.

What is the difference between these two patterns? They seem the same to me. Thank you.

Mary,
It's a fairly subtle difference of angle. Download and printout both. Then stack one on top of the other, and you will see. The second one has more balanced and sharper angles and the border is more even and narrower.

Hope this answers your question!
Moni

Moni:
I can't print the pattern of the star :-( said that have a lot of printing, that wait 24 hours.
Please, can you authorize my printing?

Would love to have these in size for.a 12 ,inch pillow

The deigns yield a 12 inch block. If that's too scant for the pillow you need, then add a little sashing. The patterns are free and I think I set things so anyone with the link can download and print them.

I love your star and also your directions on printing out pdf's. I would love permission to make the block to go in a quilt for our guild. I could not find the info to contact you other than this comment.
Judy

Newer Post Older Post Home
Subscribe to: Post Comments (Atom)
All pictures on this blog are owned and copyrighted by Fred and Monica Spicker.
Use of any images without express permission by the owners is denied. THIS INCLUDES PINTREST!

If you ask, we'll usually say yes, as long as you credit us!

Moni
I am an avid outdoors person who quilts, knits, embroiders, sews, etc...